Texas is famous for many things, the Texas BBQ, hot weather, and even Dr. Pepper’s home.

Only a tiny percentage of people know Texas as an excellent whiskey-producing state.

Like many states, whiskey has deep roots in the culture of Texas, but before we start talking about the history of Texas whiskey, let’s look at 10 of the best whiskeys produced in America’s second-largest state. 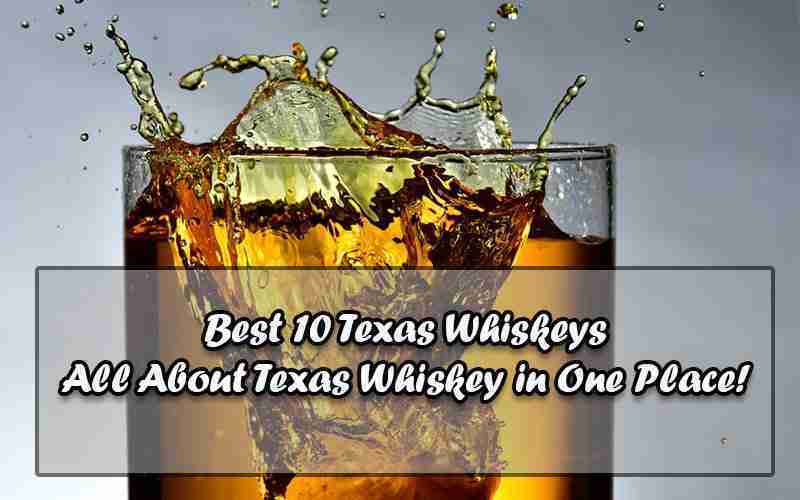 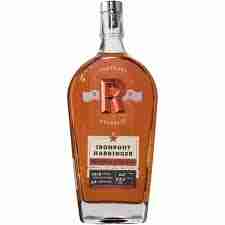 Ironroot has a great history. In the 1800s, the town of Denison, Texas, suffered from a phylloxera outbreak.

One grape breeder managed to save the grapes from the outbreak, becoming known as the iron grapes.

Some 200 years later, the Ironroot Harbinger Bourbon was named the World’s Best Bourbon at the World Whiskies Awards 2020, not to mention several other impressive awards.

The nose will detect a lovely sweet aroma of syrup, oranges, and red fruits.

The red fruit scent is continued into the flavor, combined with spices and dark sugar.

This particular whiskey is 57.5%, and it is recommended that you look out for other blends of Texas whiskey from Ironroot.

Balcones didn’t take long to build a name for themselves. What started as a small distillery out of Waco now has a range of 100% blue corn spirits, varying in barrel selection and aging.

The one that caught our attention was the Blue Corn Bourbon at an impressive 64.5% ABV.

You might not notice a difference in color to the other Balcones bourbons with their rich amber color.

Compared with some of the other blends, you will notice that the smell isn’t too overpowering despite its kick.

Rather than spice, you can smell creamy custard. The blue corn provides a fantastic flavor, an explosion of sweet and savory with the right amount of heat and a touch of salt. 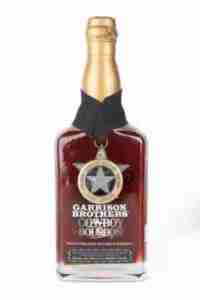 Of the 2019 batch, there are just 6,440 Garrison Brothers Cowboy whiskey bottles.

Each is individually numbered by hand and signed by Donnis Todd, a master distiller.

The bottle is then rested on a satin pillow and carefully stored in a custom oak box. It is a fantastic gift for any whiskey lover.

This particular whiskey came about by accident. After practicing with various mash bills, the creator couldn’t illegally dump all unsuccessful attempts, so he blended them.

The mash consists of 74% corn, 15% soft red winter wheat, and 11% two-row barley. This mash gives the whiskey a reddish-brown look.

It is aged five years, and the final result is 68.65% Texas whiskey. It has a rich taste of toffee, cherry, and vanilla. Vanilla is also one of the most predominant aromas too. 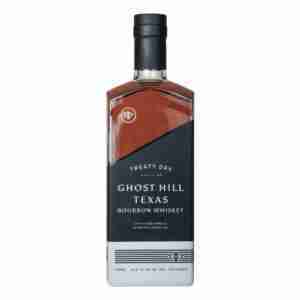 Treaty Oak Distilling can be found in Dripping Springs, which provides all of the grains for the whiskey.

The distillery noticed a rapid maturation process because the warehouse isn’t temperature controlled.

The extreme weather changes meant that the flavor from the American white oak #3 char barrels was extracted faster.

The one thing that made us notice this whiskey that the pure wheat fragrances.

It was like rolling around in the hay in summer. But, there is also a sweetness to it. We appreciated its depth, the oak, and a touch of honeycomb when sipping the whiskeys. There was a surprising amount of heat for just 47.5%. 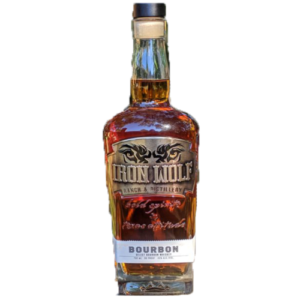 At Iron Wolf, they wanted to focus on the experience of whiskey and create a fine drink.

A couple of years of research went into the concept before building a world-class Spicewood distillery that whiskey lovers could visit.

The distillery produces a range of flavored whiskeys, but all are based on the Iron Wolf bourbon.

The distillery has managed to keep the mashed blend under its hat. We know that each stage is carried out at the distillery and that the whiskey is aged for three and a half years.

Bottled at 45% ABV, we loved the sweet toffee caramel on the nose and the palate.

At the same time, we detected some rye in the blend with excellent peppery heat. Again, this was a great choice, neat and for cocktails. 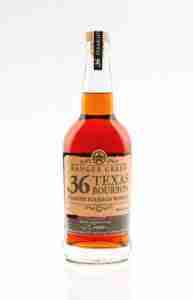 The name did have us wondering! It references the .36 caliber pistol used by the Texas Rangers, an original idea, and we like things that add to the experience.

Ranger Creek began a new series of whiskeys in 2011 called the SCS or Small Caliber Series.

The SCS uses smaller barrels than the traditional aging process, which brings the whiskey to maturity faster.

At 48%, it still has a bit of a bite. The first experience is the warmth of spices, a little cinnamon, and pepper, which is well balanced with brown sugar and caramels. I am considering the Ranger Creek.

36 Texas Straight Bourbon has only been aged for nine months. You will be blown away. 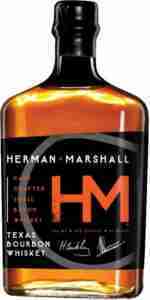 Herman focuses on what goes into the bottle while Marshall takes care of what happens outside the bottle.

It is a lovely rich golden color. As soon as you open the bottle, you can tell a high level of corn in the mash.

It’s a smooth whiskey, easy to drink at 46% ABV. Each flavor is there yet delicate.

You will detect hints of vanilla, butterscotch, and even a little coffee. You can try the Herman Marshall Rye Whiskey if you want something with more heat. 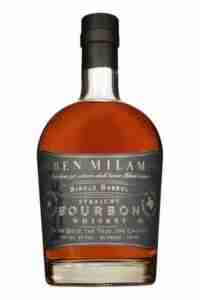 The design of the bottle tells this story. The silhouette of a man holding a rifle in the air and the dedication at the labeled bottle are for a military hero named Ben Milam. Milam would have been proud when the whiskey won a double gold medal at the 2018 Sab Francisco World Spirits Competition. The bottle looks like a dark amber color but is still quite evident.

There is no information about the mash or the aging period, but it smells like fresh-cut grass in summer and the warmth of cinnamon and vanilla’s sweetness. When tasting, we could almost pick up some rye but most definitely brown sugar, oak, and spices. We noticed that the flavors came into their own once the whiskey had been allowed to air. 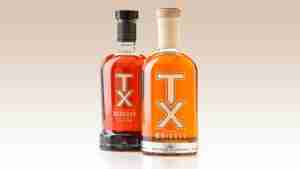 Possibly one of the first whiskey distilleries in the North of Texas, Firestone, and Robinson keep their mash bill disclosed.

They have created their strain of yeast from Texas Pecan nut. We know it has been aged for four years as straight bourbon.

The unique rich red color was the first thing to catch our attention. Opening the bottle released a wave of corn and a lovely touch of pecan.

The freshness on the nose reminded us (in a good way) of youthfulness.

There is an exciting combination of tastes: pecan, brown butter, and a little vanilla. In contrast, there is just a touch of pepper and oak. 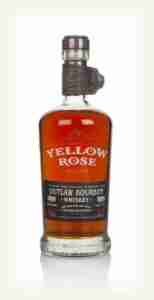 Thanks to a Kickstarter campaign, Yellow Rose is here today that helped the company open a tasting room.

They now produce blended and rye whiskeys as well as the Outlaw bourbon. It has only been aged five to seven months; the dark copper color surprised us.

This, combined with the heat from the Gulf Coast, means the charred oak is absorbed quickly. It smells sweet, oaky, and floral.

Overall, this left us pleasantly surprised.

What Is Texas Whiskey?

It’s a tricky question. We don’t want to say that there is no such thing officially. But rather than its location defining it, it is determined by the distillers’ passion and ability to focus on individuality.

Texas whiskey is bourbon. Bourbon can be produced anywhere in the United States, but the bill mash must be at least 51% corn.

It also must be distilled at below 160 proof. What makes bourbon different from other whiskeys in the barrels that are used?

Each batch must use new oak. There is no reusing of a barrel, leading to a loss of flavor over time.

The History of Texas Whiskey

The Texas Whiskey industry is very young compared to some other states and their whiskeys.

That’s not to say that the state hasn’t been producing it for longer.

It just means that the concept of Texas Whiskey wasn’t born until 2006. When Garrison Brothers were granted the first distiller’s permit for bourbon outside Kentucky and Tennessee, this was the oldest legal distillery in Texas.

And it wasn’t an instant success. The young distillers struggled to make Texas whiskey an actual thins for the first few years.

But soon after, things began to change. A few more distilleries were created, and brands experimented with flavors.

Over the last decade, production has increased by over 300%. Although still young, Texas whiskey has become well established and won some of the most significant whiskey awards worldwide.

There are over one hundred whiskey distillers in Texas today.

How Is Texas Whiskey Made?

There are no legal requirements for a Texas whiskey (except those implanted regarding bourbon in the States), so the distilleries can experiment more. The basics are always the same 51% corn, yeast, water, and American oak barrels. The grain misplays a role in the variations of color and flavor. But then there are both subtle and considerable differences in yeast and water. Some distillers will use limestone water.

As we saw Firestone & Robertson, their pecan yeast makes all the difference.

Each distillery will have its production methods. Regardless of the type of corn, most distillers insist on sourcing their ingredients locally Garrison Brothers use only 100% food-grade Texas corn rather than feed-grade…

This is seen more with Treaty Oak, the distillery currently using Texan oak for its barrels.

The Texan climate also has a huge impact. We all know that Texas is famous for its high temperatures, but there are also significant fluctuations in the summer months. Then you have to factor in the humidity. Some areas of Texas are arid, while others are more humid.

This will affect the time it takes for the whiskey to mature in the barrels. The traditional full-size barrels take years to allow for maturity. During this time in Texas, a barrel could lose up to 30% of its content due to evaporation.

This is why some Texas distilleries are switching to small barrels.

Maturity is faster, and therefore, many Texas whiskeys are considered young. As we learned, this is far from a bad thing as we tasted some amazingly full-bodied, rich whiskeys that you would never have guessed had aged for just months.

Texas has surprised us briefly and produced a whiskey some would have thought impossible. 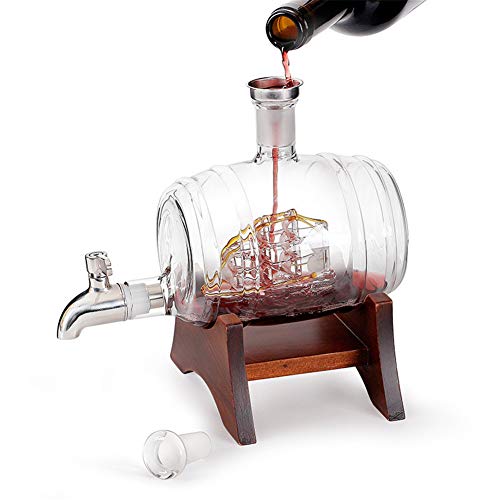 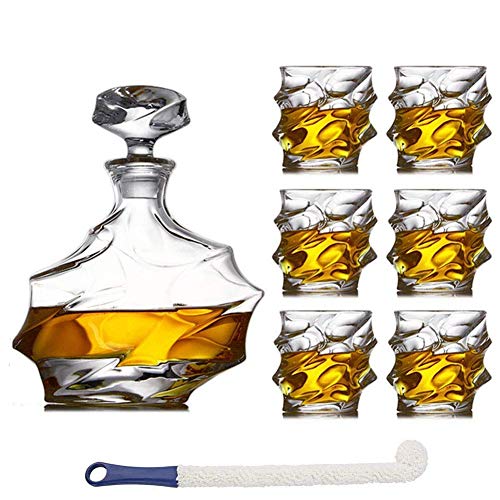 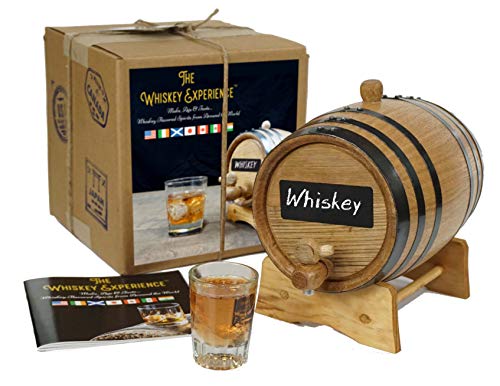 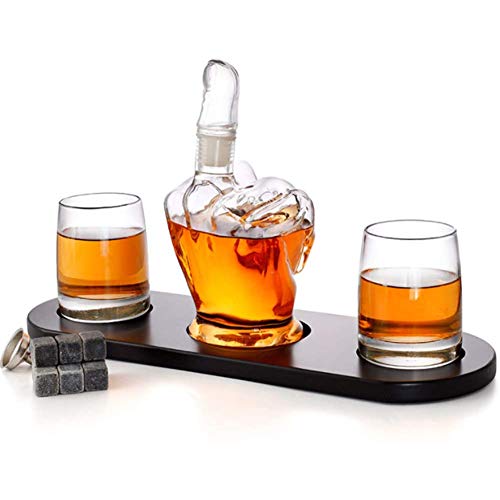 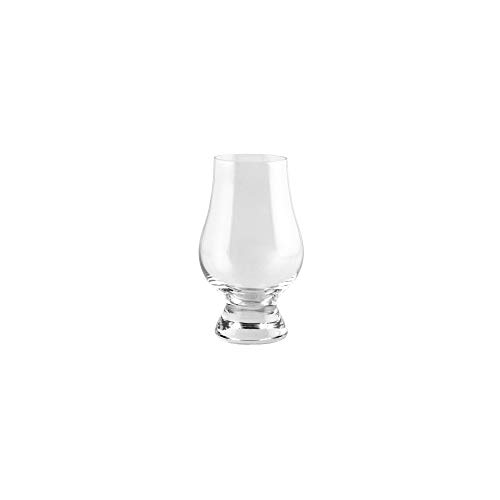 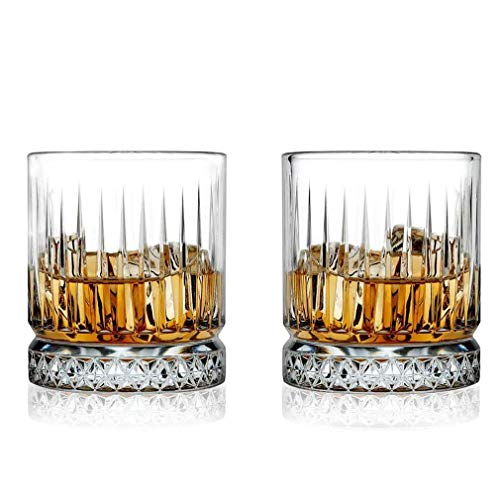 After serving as a US Navy SEAL, Founder and Head Distiller Nathan Newhall wanted to continue serving and giving back to the veteran community in a meaningful way, so he developed Warrior Whiskey as a veteran tribute product. Warrior Whiskey is a blend of

The oldest bourbon ever produced in Texas, Garrison Brothers Cowboy Bourbon has a bright mahogany color and aroma of burnt sugar, caramel, and baking spices. The palate is filled with warm notes of peach cobbler, vanilla extract, and roasted nuts, and le 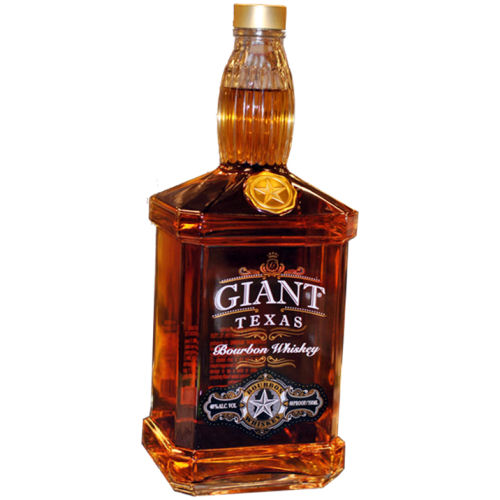 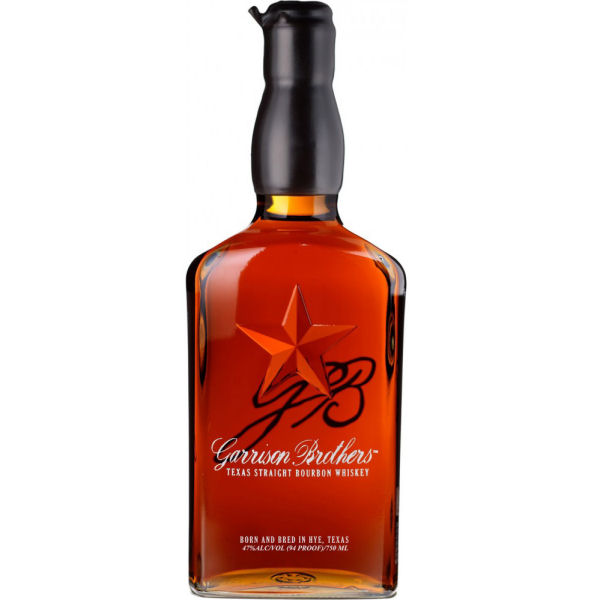 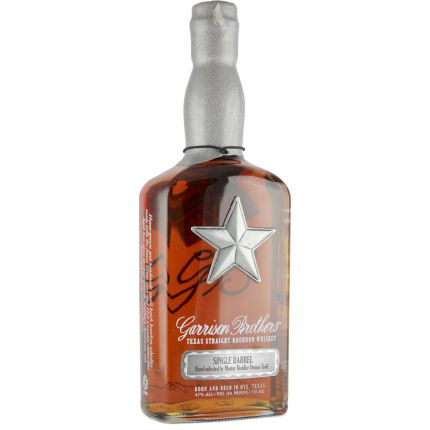 Garrison Brothers Texas Straight Bourbon Whiskey is bold, proud and authentic. It's home-grown and handcrafted from the finest ingredients. Plump, organic yellow corn from the Texas Panhandle. Premium organic winter wheat that we grow ourselves here on t 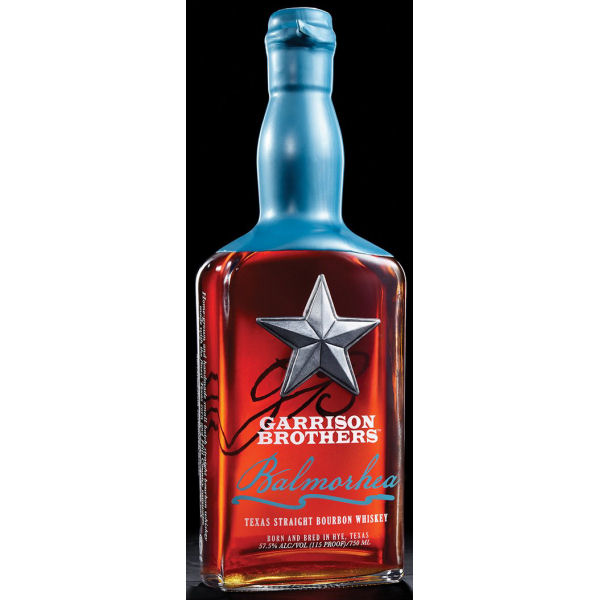 It gives us great pleasure to introduce the beautiful Balmorhea. This magnificent Texas Straight Bourbon Whiskey is bold but majestically-crafted, having been aged four years in new American white oak barrels, then transferred to a second new American